Get me outta here!

OMG cant believe we grew up in the Coogee area and missed this gem. The Gs have not been so excited for a long time Giles really got the spot. We wanted to rush home and blog straight away but then again we were conflicted because we wanted to keep this gem a secret as there did not seem to be a lot of people there. We met a lovely Irishman who frequents the pool who asked where we were from, when we hung our heads in shame and said “Coogee”. He responded “ Don’t worry, I’m from Ireland and I’ve never kissed the Blarney Stone”. So I guess that is a fair comparison. The fresh ocean water rolls in constantly and there were several schools of little fish. 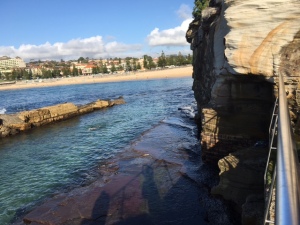 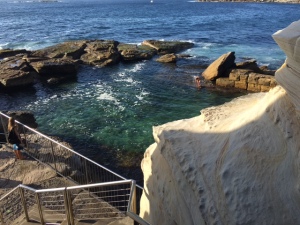 We now have a little group of swimmers meeting on a Friday morning we have an L, a B, an S, an R and various other letters all wanting to find their G spot. So on the recommendation of Mrs RG’s physio we changed venues this Friday and met at Giles Baths on the North end of Coogee beach. It was absolutely magnificent. The weather was perfect, the water was clear and fresh with lots of fish. We met a lovely lady who had moved down from Noosa who told us a blue groper lives there and can be seen at 6am but shies away as the people come down. We cannot rave enough there is a good length approximately 50m to do a proper swim and yet it could be a secluded romantic spot too.

Giles is a natural Rock pool and is often referred to as the ”bogey hole”. In the early 1900s it was the male baths, maybe this is what got the Gs were so excited) as opposed to the ladies baths at the south end of Coogee which still exists today.

You need to pass through the archway that says Baths and is now a solemn reminder and memorial to the victims of the 2002 Bali bombings who came from the area. It is situated at Dolphin point on Coastal walk in Dunningham Reserve. There are a not of stairs down to the pool but a new handrail has been built to make it a bit easier. Once down at the ‘bogey hole” you feel like you have entered a secret world, even once you pass through the archway way with its old world charm you feel as if you have gone back 100 years. 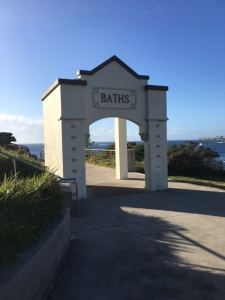 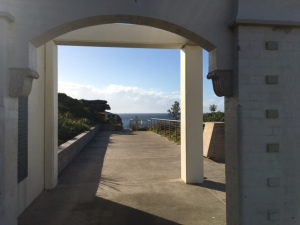 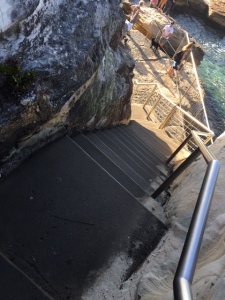 There are no facilities at the pool except a yellow chair someone seems to have kindly left. Having said that there is an outdoor shower and toilets in the park and nearby Coogee Pavilion has toilets and of course the beach facilities under the promenade. 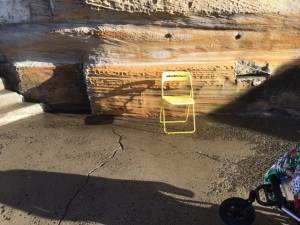 Coogee actually is amazing. The beach was beautiful, a large group of ocean swimmers jumped in at the South end and swam towards us and the promenade, parks, walks and shops are great. There are 4 ocean pool, Giles, the children’s pool at the south end,  McIvers Baths and Wylies. 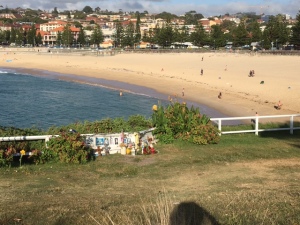 The only downside to this gorgeous pool was that it was difficult to get in and out. We went mid tide, I assume high tide would be easier as you could access the water directly from the stairs but we have been told it can get a little rough when the seas are rough at high tide. Low tide would make a shallow pool but with the lichen you would have to be very careful getting in and out.

We finished our morning with coffee at the Coogee Pavilion – a great end to a wonderful morning!